Please NOTE: Access to the film itself will not be provided, but it can be streamed on available platforms. 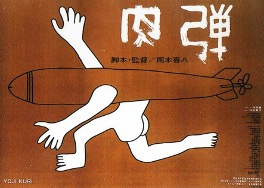 The Human Bullet, 1968,
written and directed by Okamoto Kihachi

This satirical look at the absurd side of World War II deals with the topic of human torpedoes and suicide missions.  The unnamed protagonist is assigned to destroy an American battleship at the cost of his own life.

The annual February Japanese Film Series is presented by the University of Pennsylvania Center for East Asian Studies (UPenn CEAS) and the Japan America Society of Greater Philadelphia, this year as watch parties. This means that you will need to be watch the film using your own access to a streaming service (or by watching a physical DVD or similar).