Please NOTE: Access to the film itself will not be provided. Film is streaming now on Hulu or other platforms. 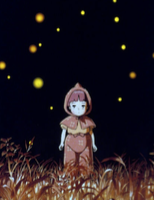 This animated masterpiece follows two children struggling to survive in the aftermath of World War II.

The annual February Japanese Film Series is presented by the University of Pennsylvania Center for East Asian Studies (UPenn CEAS) and the Japan America Society of Greater Philadelphia, this year as watch parties. This means that you will need to be watch the film using your own access to a streaming service (or by watching a physical DVD or similar). The first week's film, the Burmese Harp, is available through Hulu and can likely also be found via other platforms.