Please NOTE: Access to the film itself will not be provided. Film is streaming now on the Criterion Channel, and is also available for streaming at the Internet Archive 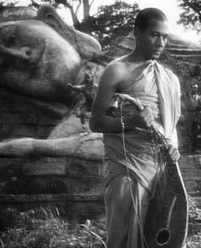 After becoming separated from his platoon, a Japanese soldier dons a Buddhist monk's robe and tends to the bodies of casualties strewn across the war-torn countryside.  For more information about the film visit IMDB.com.

The annual February Japanese Film Series is presented by the University of Pennsylvania Center for East Asian Studies (UPenn CEAS) and the Japan America Society of Greater Philadelphia, this year as watch parties. This means that you will need to be watch the film using your own access to a streaming service (or by watching a physical DVD or similar). The first week's film, the Burmese Harp, is available through Criterion and the Internet Archive.