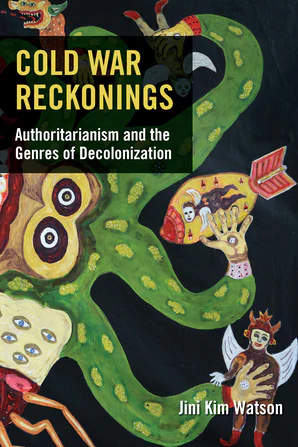 How did the Cold War shape political modernity in the Third World, and what do literature and film reveal about such political contestations and their afterlives? This talk examines Joshua Oppenheimer’s controversial documentary The Act of Killing (2012) and Han Kang’s Human Acts [Sonyŏni Onda] (2014) for their intimate reckoning with the past violence of Cold War authoritarian regimes. Framing my analysis in terms of the temporal logic of transitional justice, I consider Oppenheimer’s striking aestheticization of killing and Hans’ exquisite portrayal of pain to ask whether the genres of truth commissions—individual truth-telling, commemoration, reconciliation, and official mourning—can proffer notions of ethical reckoning beyond today’s authoritative temporality of “post-Cold War.”The talk is drawn from my new book, Cold War Reckonings: Authoritarianism and the Genres of Decolonization (Fordham UP, 2021), which examines cultural production that emerges from, and reflects upon, the entanglement of the Cold War and decolonization in East and Southeast Asia.

Bio: Jini Kim Watson is Associate Professor of English and Comparative Literature at New York University. Her research and teaching focus on Asia Pacific literature, film and cultural studies; decolonization and the global Cold War; spatial and urban theory; questions of sovereignty and political modernity; Marxism and critical theory. In addition to Cold War Reckonings (Fordham UP, 2021), she is the author of The New Asian City: Three-dimensional Fictions of Space and Urban Form (Minnesota UP, 2011), and has also co-edited, with Gary Wilder, the collected volume, The Postcolonial Contemporary: Political Imaginaries for the Global Present (Fordham UP, 2018). Watson received her PhD from Duke University's Literature Program and undergraduate degrees in architecture and liberal arts from the University of Melbourne and University of Queensland, Australia.