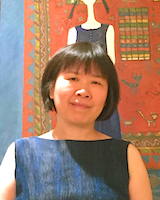 In religious ceremonies in early modern China, people burn boats made of paper and reeds on water or near water, resulting in a major urban spectacle. This talk will introduce two basic types of paper boats: boats burnt to drive away plague during pandemic and the dharma boat used to transcend one’s soul during individual death rituals and public memorials.  This paper asks how the material specificities of paper and flames shaped the boats artistically, religiously, and politically.

Yuhang Li is an associate professor of Chinese art in the Department of Art History at the University of Wisconsin-Madison. Her research interests cover a wide range subjects and mediums of visual and material cultures in late imperial China, such as the cult of Guanyin and gendered image making, mimesis and devotional practice, textile and paper arts, opera and Chinese visual culture.  She is the author of the book Becoming Guanyin: Artistic Devotion of Buddhist Women in Late Imperial China (Columbia University Press, 2020) and co-curator and co-editor of the exhibition and resulting catalog Performing Images: Opera in Chinese Visual Culture (Smart Museum and University of Chicago Press, 2014).